Once again a thoroughly enjoyable trip, relaxed, easy-paced and with plenty of interest. Initial thoughts had been to head south-west, but time limitations and a potentially smaller clientele persuaded us to reschedule that journey for 2016. This year’s expedition is shorter than what now passes for average, on the basis that coming up in a couple of months or so is a far bigger sleeper trip, to Colorado and points even further west.

So this time we opted for a route similar to the that of the very first sleeper trip in 1995, namely to Inverness and Kyle of Lochalsh.

For variety we would spend a night in Plockton, a small, picturesque village not far from Kyle, and not one but two nights in Inverness. This simplified the planning somewhat compared to recent trips, although as is often the case complexities soon showed themselves. Booking accommodation for five single men is rarely straightforward, but achieved without too much difficulty, despite Jim having to return a night early for work reasons. Then Richard found that he had been awarded a non-negotiable hospital appointment on Day Two of the event calendar, with no prospect of joining the trip for more than the last full day. So we were down to four.

The party that set out for London via Liverpool was actually only two strong, as Malcolm was due to join us at London and Jim at Carlisle. Being First Class passengers, in more ways than one, we availed ourselves of both the Virgin Lounge at Lime St and the included dining facilities on the train. London arrived on time and so did Malcolm, striding through the entrance to Euston as we meandered towards the exit. He promptly advised us of how lucky we were to see him, having spent most of the previous afternoon overseeing the repair of a power cable he had inadvertently severed in the back garden.

The next objective was to decide how to spend the rest of the day, little thought having been given to it up to now. After a little pondering and evaluation of a Tube map the idea of a river journey occurred. On a hot day it would be a cool way to travel, and a cool way of getting to an interesting place, namely Greenwich.

A mercifully-brief underground journey took us to the Embankment, where we joined an apparently-static queue for the waterbus. Fortunately an attendant took pity and allowed us priviliged credit cardholders to jump the queue and pay at a terminal on the landing stage. Further privilege was then showered on us, in the form of a hefty discount for possession of a valid Travel Card. The craft itself was a large catamaran with a surprising turn of speed where traffic conditions permitted. We progressed rapidly downstream past tourist landmarks aplenty, punctuated by diversions to aquatic bus stops for transfer of more passengers.

We disembarked at Greenwich to be confronted with a variety of potential attractions. We chose the most obvious, Cutty Sark looming over the foreshore like Captain Hook's pirate ship, on the point of near-vertical take-off for Neverland. By contrast the London Eye, which we passed on the way downriver, never looked as it would fly, despite all its clever technology.

Inside, the tea clipper was most impressive, with the experience enhanced by a number of imaginative hands-on displays. Respect was readily given for those who followed the nautical career path. The only shortcoming was that the cafe shut a little early, so we were compelled to seek refreshment in the village beyond.

This however was no bad thing, as we encountered a Waterstone's bookshop with tea and cakes also on offer, with the added bonus of comfortable upholstery.

We returned to Euston via the Docklands Light Railway, this time full of overheated commuters, as was the Northern Line. Once was bearable, twice a day for perhaps years maybe not so. At Euston we diverted to a fairly-quiet Doric Arch for a meal, and thence to the Virgin Lounge to await the sleeper.

We boarded successfully and departed on time, and after a short rest repaired to the lounge car for additional refreshments. A text from Jim revealed that he was safely parked at a Carlisle hostelry and awaiting pick-up. This duly occurred at around 11pm, after which the stewards were promptly engaged to provide sustenance of the Scottish variety, namely haggis and whisky.

Morning appeared fine and clear, and our pre-ordered salmon and scrambled eggs made a welcome start to the day. As often seems to be the case, we were running a little late, but not so as to inconvenience our timetable. This included second breakfast in the Victorian Market at Inverness, which was achieved satisfactorily before embarking on the next stage, another train to Kyle of Lochalsh. As remarked on previous sleeper trips, this line is considerably scenic, particularly in the weather we were experiencing, and the destination equally attractive.

The first priority was lunch in a nearby cafe, and the fact that it had a liquor license meant lunch extended well into the afternoon, particularly as there was no prospect of a bus at the right time to take us over to Skye.

Eventually it was time to take the train two stops back the way we had come, to our overnight accommodation at Plockton. There we divided into two pairs, one allocated to a nearby B&B and one to an establishment a good half-mile away as the crow flies.

Unfortunately flying itself was an obstacle, in the form of a small airstrip which had to be circumnavigated by road. On arrival we were warmly welcomed and gently castigated for not phoning ahead for a lift. Later in the evening we were indeed given a lift, for all four of us into the village for seafood at a very busy Plockton Inn.

On the walk back we passed a sheepdog doing the nightly round-up, not of sheep but of geese, into a presumably fox-proof coop. We also had the benefit of a short-cut across the airfield, the securely-locked gates on either side being somewhat at odds with the carefully-mown grass path between them. 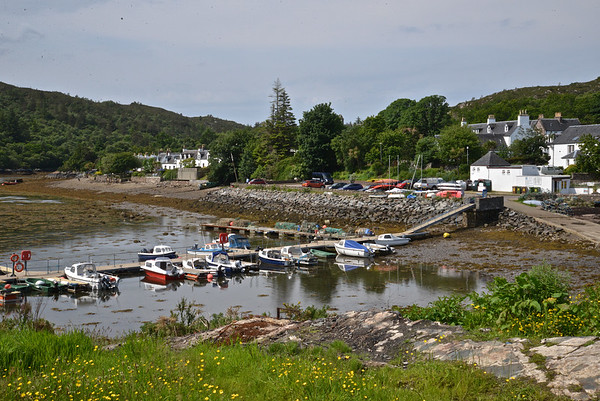 Next day was warm and sunny, with no particular agenda until the lunchtime train back to Inverness. Tony did his good deed for the day by helping the local postie to load a large parcel into the back of her van. Apparently it was a vacuum cleaner being returned to sender after failing the B&B’s endurance test. A not uncommon occurrence, according to the landlady.

We then strolled along the village foreshore and with it being low tide, onto a small island, to admire the view and watch assorted canoeists do their thing. Morning coffee outside the Plockton Hotel was followed by the same establishment supplying us with takeaway haggis paninis for the journey.

On the way back rain occurred, but fortunately it had stopped by Inverness, and the evening's visit to an Indian restaurant went undisturbed.

Thursday was another fine day, and again with a free morning, spent on a little light shopping and leisure reading. The afternoon was spent afloat, on a cruise down the Caledonian Canal and out on to Loch Ness.

And very pleasant it was too, on a well-found large motor craft complete with the essentials of both open and closed accommodation, and a licensed bar. The scenery was out in force, supplemented by a variety of vessels on both canal and loch, the most impressive being a large sailing ship, the ‘Flying Dutchman’.

At Urquhart Castle we exchanged some multinational passengers for a new set and returned to our starting point at Tomnahurich Bridge. There we had the unexpected bonus of an open-topped sightseeing bus ride, at no extra charge, back to the centre of Inverness. As Jim was due to leave us that evening, on the sleeper back south, we had an early meal in Wetherspoons, whilst watching the weather turn distinctly damp.

Friday was our last day, and after a leisurely breakfast we departed from our respective B&Bs, secured lunchtime rations in the local Co-op and headed for the station for our train to Edinburgh. Predictably on a hot humid day the air conditioning was not working, but fortunately the odd window was. More scenery passed by as we headed south via Perth and Kirkcaldy, viewing the well-advanced new road bridge as we crossed the Firth of Forth.

Edinburgh was reached on time, which was fortunate as it gave just enough time for Tony not only to leave the tickets on the train as we left, but also to realise the fact before we boarded the next one and race back to retrieve them. This time the train was less crowded and less hot, credit to Virgin when it is (sometimes) due. Wigan came up on cue, as did our final rail service to Southport.

An itinerary is here.