2005 - Aviemore and Kyle of Lochalsh - Railwaygardener

The government, we are reliably informed, is considering congestion charges for the train network. After years of being harangued about the virtues of public transport (not that the SMRS ever needed convincing) it seems that it is now too popular for its own good. We will be required to pay extra for letting the train take the strain.

Maybe now is the time to do the same for the sleeper trip. With bookings up 100% from last year it is clearly underpriced, and in danger of being enjoyed by the unwashed masses, instead of by the discerning Alpha elite who are the target grouping.

Perhaps we are making the itinerary too attractive - this year not only a guided tour of Speyside Railway's workshops but also a visit to the Commando Memorial at Spean Bridge. Add in a short but significant ride in the day coach of the Fort William sleeper and the package was complete.

As a bonus, and probably uniquely in the history of rail tours, the trip started with a guided tour of a potting shed. Not any old shed it must be said, for it contained all the basics needed to support intelligent life, namely a beer store, a TV and a model railway layout. After the necessary critical review of the owner's modelling skills, we moved on to the adjacent begonia greenhouses. Again not just any begonias, but a sizeable portion of the National Collection, over 700 varieties in all. As Winston Churchill very nearly said: 'Never in the field of human horticulture has so much been grown for so many by so few'.

After the chaotic scenes marking last year's departure, the initial moves of the 2005 expedition went remarkably smoothly. Despite using four different vehicles on the approach run we achieved a successful rendezvous at Preston station. The sleeper was on time, the berths were ready and waiting and the lounge car was freshly stocked with beer. Inverness was reached in style and comfort, with sufficient time for a second breakfast at a convenient cafe.

The Speyside Railway at Aviemore lived up to the reputation earned at our last visit, with the added bonus of weather which the global warmers constantly warn us about. Indeed the guided trip around the loco sheds gave some welcome shade, as well as a full description of its contents and of the difficulties of extracting suitable monies from the Lottery Fund.

Practice makes perfect so they say, and after last year's escapade with the camera card Joe went one better this time and remaindered the complete camera. Left in a drawer at the Inverness B&B, allegedly for safe keeping. Unfortunately he failed to report this manoeuvre to the expedition quartermaster. The item therefore was not recorded on the exit procedure checklist and remained secure in the dressing table, whilst we entrained for the west coast. Fortunately the landlady took pity on our senior citizen and responded positively to the phone call requesting the camera to be forwarded back to Formby.

The highlight of the westward journey, apart from the increasingly scenic and sunny scenery, was the sudden appearance of the Royal Scotsman tour train, which passed us eastbound at Strathcarron. For some reason we had not been advised of this venture, so quick work was needed with the remaining cameras to ensure the event was suitably recorded.

On arrival at Kyle the party split, with the majority heading to the Lochalsh Hotel for lunch, whilst the expedition's medical officer decided fasting would add to the pleasure of a dip in the jellyfish- infested waters of the loch. Next in a crowded itinerary was a bus across to Kyleakin on Skye. The fare was a shock - 15p for a single, strictly cash, no credit cards, cheques or concessions. We reluctantly paid up and crossed over the now toll-free bridge to Kyleakin. After a quick survey of the village, and mindful of the clouds building up over the Cuillins, we embarked on a route march back over the bridge to the mainland, thereby saving the return bus fare for more important matters, such as tea and scones at the harbour cafe.

The final stage of the day was the bus ride to Spean Bridge. Much to our disappointment the driver accepted the printout of the internet booking with the merest dismissive glance. Any hopes of a prolonged and satisfying argument over the validity of our e-tickets were cruelly dashed. The ride itself was of the vigorous variety, through some of Scotland's finest (and towards the end dampest) glens, arriving shaken, unstirred and on time at the B&B. The evening was spent at the Commando Bar, drinking Skye ale served somewhat incongruously by a young Polish waiter. Attempts to generate interest in a gentle post-dinner yomp up to the Commando memorial met with a disappointing if predictable result. Also predictably, the day ended with testing a particular brand of malt whisky to destruction in the B&B's comfortable conservatory.

Thursday was Jacobite day, permitting a fairly leisurely start before boarding the day coach on the Fort William sleeper for the last few miles to its destination. A phone call to Fort William station confirmed it was on time, thereby ensuring we did not get up earlier than absolutely necessary.

The steam loco was the same B1 as at our previous visit in 1991, this time camouflaged by a repaint in BR black. It performed faultlessly in both directions, and inbetween allowed us to partake of the usual excellent lunch at Mallaig’s Marine Hotel.

Now the competitive spirit is strong in the SMRS, and the loss of a mere camera was bound to produce a strong response. Knight to king's pawn two, and Jim claimed the disappearance of a bum bag, complete with many and various financial resources. Several helpful theories as to the circumstances of its loss were promptly proffered: it was left at the hotel at Mallaig, in the toilet on the train, on the street in Fort William, etc.

A return to the train drew a blank, as did a phone call to the Marine Hotel. However as the unfortunate victim prepared to throw himself on the mercy of the police, our landlady phoned to say the article was indeed in the safe custody of the Fort William constabulary. Just how she knew of this information, and of the phone number to pass it on to, is one of those mysteries which, like Masonic secrets, are only divulged to those deeply immersed in the lore of the Bed and Breakfast hostess.

Jim then had the task of refilling the reclaimed bag, a distinctly non-trivial operation. The police, with their customary efficiency, had carefully segregated each item by type and deposited them into sealed envelopes, the better to make an exhaustive list of the bag’s contents. English notes, Scottish notes, dollars, euros, travellers cheques, keys, phones and enough plastic cards to play a decent hand of gin rummy, all had to be restored to their rightful compartment. Three cards had already been cancelled, and were ritually torn apart on the tea table, in front of witnesses.

Then back to Spean Bridge for a second night, courtesy of the day coach of the southbound sleeper, somewhat cramped due to the lack of a lounge car and presumably, the beverage stocks which went with it. Same conservatory, different malt.

The final day dawned sunny after overnight rain, and we looked forward to a lack of unplanned events. We might have achieved this too, but for a camera charger which inexplicably became separated from its owner (Jim, as it just happened).

Fortunately our landlady was by now well versed in our expedition procedures, and had carried out a comprehensive sweep-search of the bedrooms before signing our departure chit.

It was perhaps tempting fate to split up again at this stage, particularly with a southbound train to catch. However by now we were past caring, so three members were authorised to depart for Fort William on shopping leave, whilst the remainder set off for a brisk uphill stroll to the Commando memorial.

There we paid our respects to both soldiers and scenery, before repairing to a convenient hotel for refreshments. Sitting outside enjoying the view had one drawback, in the energetic form of a young cocker spaniel that had clearly just been through its initial commando training and was anxious to practice its new-found skills on any unsuspecting visitor.

Back to Spean Bridge to collect bags and charger and await the Glasgow train. A phone call to the other half of the party confirmed that the train from Fort William was on time, the shoppers were aboard saving seats, and a local cafeteria had supplied a suitably-sized luncheon hamper to sustain us at least as far as Crianlarich. It seemed unnecessary to mention that some of us had already partaken of venison and home brew at Spean Bridge station. 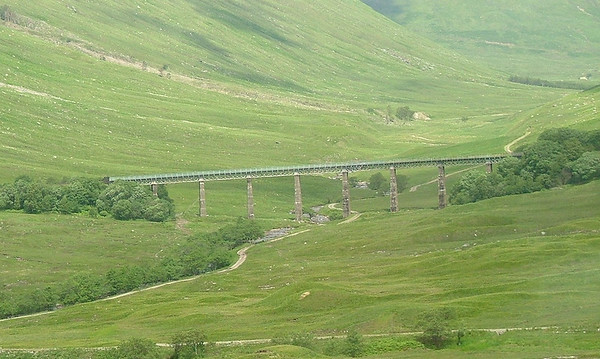 Glasgow Central was reached in good time, but this was more than could be said of the 1705 arrival from Euston. Its tardiness meant we were 20 minutes late leaving, and its lack of maintenance meant the public address, the air conditioning and the toilets were all of doubtful functionality. However we were promoted to first class for our trouble, so the overall rating of the sleeper trip was still scored as 'Excellent'.

At Preston the doctor’s wife was ready and almost waiting to take us back to Southport, and no doubt to require her spouse to provide a full written inventory of items taken v. items returned. The retired fireman likewise retired to count his begonias and marvel at just how much spare-room-decorating a determined wife can do when her husband is well out of the way.

An itinerary is here.