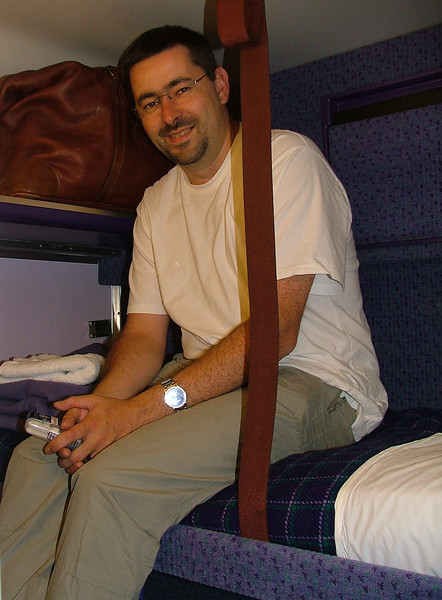 Recently, after many years of good reliable running, ScotRail lost its sleeper franchise. The successful bidder was Serco and has taken over the franchise earlier this year. Amongst the many improvements promised as part of their bid. The main change will come in 2018 in the form of 75 brand new carriages with 4 classes of travel. First class with on suite berths, standard single occupancy, and standard shared occupancy and a new pod flat-beds and cradle seats to ensure guests can get rest in comfort. Passengers are promised from 2018, that they will be able to enjoy a stunning new Brasserie-style Club Car with free WiFi. But this bright future is three years away and until then the new provider of the sleeper service will have to make its mark in a different way.

The time of year is fast approaching where our traditional ‘Sleeper Trip’ holiday will take place. So I thought that I should experience the new sleeper for myself. These days, I am a regular sleeper passenger using the service to the various Scottish destinations regularly throughout the year. As I said above, with the big changes coming to the service in the future, it was going to be interesting how the new provider made its mark on this historic service.

In this modern world of rail travel where the shareholder is put before the customer, it would be interesting to see how they did.It is easier for me to board the train at Crewe, I leave work and have plenty of time to make my way, normally to Oxenholme, meet up with my uncle for a meal, then catch a train with plenty of time to meet the sleeper. This means catching a train that gets to Crewe around about ten o’clock. I could get a later one, but they cancel trains at the drop of a hat these days and this gives me a bit more recovery time. The only downside to this strategy is that it gives you nearly two hours in Crewe, now I’m not being rude, but Crewe station at night is not the most salubrious of places at night. You could always be tempted out of the station complex and into the surrounding night life. These however consist of a myriad of Indian restaurants, dodgy pubs and take away kebab houses. The latter often wins out of sheer desperation as the Virgin 1st class lounge closes at 7pm. On the plus side, I get the dirty pleasure of something not good for me. Anyway, after indulging in some culture, I make my way to the station for about half past eleven, as the train is always early and needs the time to board the passengers and change the loco crew. Even after doing this journey for over 20 years, I still feel the excitement of it. To me, it’s one of the last romantic links to rail travel in the past where you board the train in a city and wake up in he Highlands.

As part of the new franchise, new locomotives are promised in new livery, but as is normal these days, the delivery of them is late. But we are promised re-engined Class 73s to pull the train, I assume from Edinburgh, but you never know. They have however produced some re-liveried electric locomotives which look very similar to BR blue with the new Serco Caledonian sleeper badge on the side. These include Class 92s, but more interestingly, a Class 87 and a Class 86. The latter are normally used to bring the empty stock into Euston before the Class 92 takes it north. However, recently the Class 92s has suffered mechanical issues and the Class 87 has taken the train to Edinburgh. On this occasion, I was disappointed to see a red DB liveried 90 bringing the train in.

As the train pulls into the station, I strain to see any external changes. On the whole, the colour scheme is the same without the previous franchise branding, apart from one coach which has been repainted in the new colour scheme. As a believer in state railways, to me, changes in a franchise often result in a poorer service for the customer. I do try to keep an open mind and as the attendant arrived, I stood back so he could deal with the other passengers. Eventually it was my turn and he directed me to a different coach and berth to the one booked and told me that he would be along shortly. I was pleased to find that I had been moved to a first class berth. Good to his word, he duly arrived and asked if I was a frequent traveller etc. I am, but I have not used the train since the new franchise started. He went through the facilities for the train, took my drinks order and asked if I wanted a breakfast and finally what time I would like it in the morning. We chatted for some minutes about the new service and what the plans were for the future etc. He went off and came back with my drinks order and bid his goodnight.

I was immediately struck by his enthusiasm and customer service in dealing with my questions. He told me that he had crossed over directly from ScotRail to do the same job and we chatted about what the public reaction had been to the changes. As we chatted, I noticed his new uniform, when I asked about it and how much better it looked to the old one. He agreed that this was better and that it was in fact Harris Tweed and his tie was the Dress Gordon Tartan. It is often difficult to freshen things up before a big upgrade comes on line. New mattresses, new bedding, new toiletries packs have been brought in to freshen up the cabin until the new stock arrives. All subtle little things, but go a long way to making the experience better. The latter isn’t as good as the old ones where you can keep using them as a small toiletries bag, the new ones are a crappy paper bag that can only be used once, but this is only a minor issue.

The décor of the cabin is still the same purple/blue colour. It then struck how long these carriages had been in service and how many times we have as a club had been on them on holidays since 1995. The new franchise had inherited an ageing fleet with maintenance issues, but on this occasion, the helpfulness of the staff were getting them though it. In the past travelling on the sleeper, you steward determined your travelling experience. Poor steward, poor journey and I’m sure that in reality it’s no different now. But it does bring it home how important customer service is! I settled into a good book on the iPad and with my drink in hand enjoyed the journey from my berth. I always enjoy read on the sleeper, it gives you a chance to take stock and watch the nocturnal world go by through the cabin window. For me the sleeper is a sentimental journey and a link to our railway past. Eventually, the cabin light goes off and the rocking of the train aided by my wee dram sends me off.

As it always seems to be, the next morning was a beautiful sunny morning as we headed through the Highlands towards Aviemore, I even ventured out to the end of the carriage to OPEN! and look out of the window just in case there was a smouldering steam engine being prepared. It all seems to distant a memory when you could open a window and look out, it would probably infringe my human rights now or fall under some health and stupidity twaddle. Then it’s back to the cabin to pack and wait for the much anticipated breakfast. It arrived on time and hot too. For the regular members who go on the sleeper trips, it’s been some time since a breakfast menu was offered. OK, it’s not going to be the finest breakfast you’ll ever have and came in the form of an airline style meal, but it was sufficient to keep you going and wasn’t that bad.

All too soon, your Inverness appears and the Black Isle beyond. No trip to Kyle of Lochalsh this time, just a quick couple of hours in the Highland city before returning to Edinburgh via Perth and Glasgow Queen Street. I did have enough time to visit the new club shop of the mighty Inverness Caledonian Thistle opposite the station to buy a scarf for the upcoming cup final, but that’s another story.