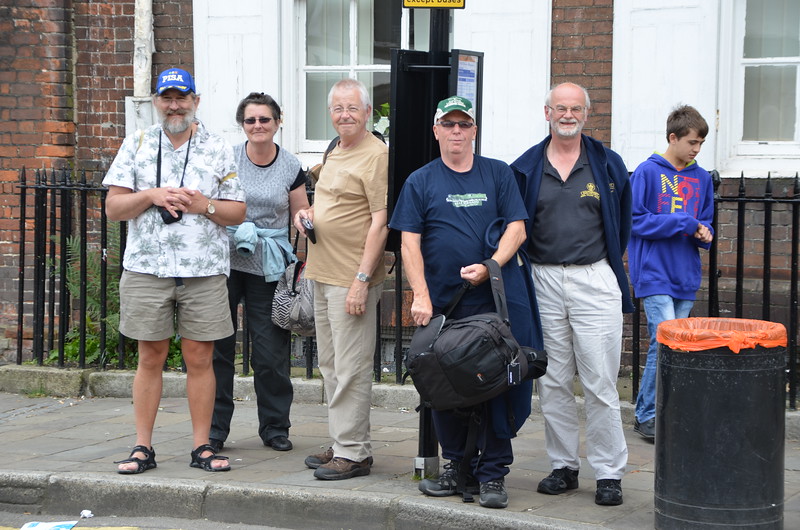 We met up at Southport on a Thursday morning to pass eight steamy days and nights together. Set off for Wigan to catch an Edinburgh train, a leisurely journey with sustenance ensued.

Arrival at Edinburgh was slightly dampened by torrential rain. Jim enticed the undaunted intrepid explorers to set off for one of his marked haunts, where we replenished flagging spirits with goodly amounts of Real Ale. Then off to Glasgow and back by various routes before ending once more in the sheeting rain in Edinburgh.

Now what to do we pondered, which further route to return to Glasgow to catch our sleeper train to London, also to wonder which establishment could appease our appetites before we boarded.

After all the day's excitements after dinner I became rather wobbly and was escorted aboard and put to bed on the sleeper by my companions. Tucked in as well.

After an excellent night's sleep we arrived in the capital of our land, here we breakfasted at a leisurely pace in a fine American-style diner. Then off again to Gillingham and Chatham Docks, which I must just say was wonderful even though five of us where caught on camera in charge of a Police Box.

Another day dawns and we are off to Canterbury to see the Cathedral, where two of us purchased expensive handbags (not the female). After a exhaustive rummage around the Cathedral and grounds we returned to the Miller's Arms to unload. Whilst there our intrepid Tony faces down three thugs intent on harming some Belgium schoolchildren and soon routed them.

After this incident we whisked off to Whitstable to enjoy the fresh air and copious amounts of seafood, returning to the Miller's Arms to partake of a six-star meal, copious amounts of real ale and a night in our cosy and comfortable rooms.

Sunday dawns with a find by Yours Truly of a leaflet advertising the ultimate train-mad persons venue. After serious deliberation we splash out on a taxi the princely sum of £120 and head off in pursuit of the mothership at Margate, Hornby Visitor Centre and Museum, which proved excellent and enlightening. After several purchases were made, a quick dash back to Canterbury for the train to Shepherdswell and an enjoyable afternoon riding trains.

Then off to Folkestone for young James to spend two nights in a cell for crimes to come. We retired to a Public House where the gentlemen were very upset at the score of the football match. But a good fish supper sorted them out.

Monday, this for me was the highlight of our trip, the Romney, Hythe and Dymchurch Railway. These exquisite little trains built by an eccentric millionaire are absolutely marvellous. I wished I could buy them but hubby said 'no way'. The Green Goddess and the cute Patriot in his black livery were a beauty to behold. I pitied poor Jim having to go back to his cell after such a wonderful day.

With Richard suffering from hayfever and off to bed we head off for an excellent Chinese Banquet in Folkestone.

Tuesday morning we are off to Tenterden and the Kent and East Sussex Railway. Poor Richard is still suffering and I am a bit wobbly so the more energetic go off and explore the castle at Bodiam whilst the poorly rest at the Inn. Good time had by all.

This is the day two gracious ladies join our party, so off trot Richard and Frank to meet the fair damsels while the rest of us tuck into lunch and ride more trains. We meet up later in Ashford to share a fine repast and a luxurious hotel to rest before our departure to Paris on Eurostar.

Gay Paris is in the offing today, we take the train from Ashford to St. Pancras, a quick tour to buy sustenance for our journey, then aboard the Eurostar in the excellent company of our new glamorous companions.