Passing out in Ravenglass - Railwaygardener

Passing Out in Ravenglass 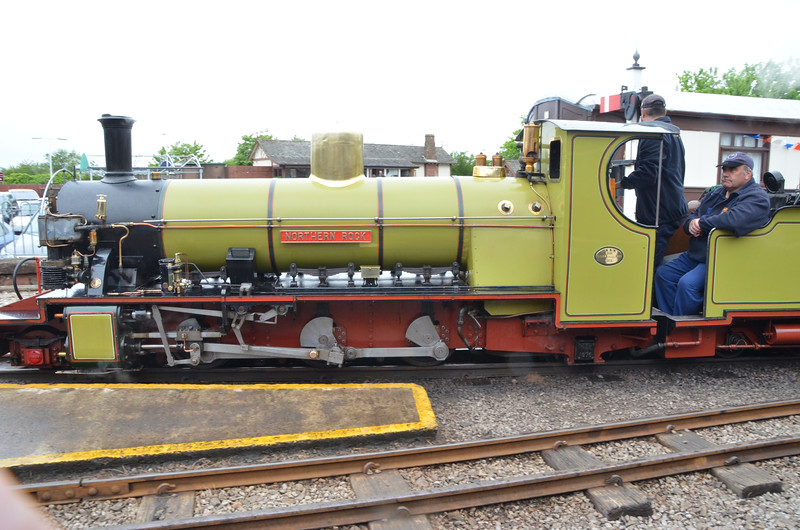 An event of momentous significance was witnessed in early June on the Ratty, or the Ravenglass and Eskdale Railway for short. Peter Mills, or 'Millsy' as he is touchingly referred to in West Cumbria, was being assessed for his fitness to drive one of their locomotives. The loco in question was Northern Rock (insert Virgin Money financial joke here). A previous driver had accepted a post across the fence as a conductor with Northern Rail. Quite how he considered this an advancement is not clear, but it takes all sorts. And just how Mr Mills had obtained the post remains a mystery. Perhaps insider knowledge of some minor but potentially embarrassing tax irregularity may have been deployed.

Now the Ratty's safety management system is a cunning and clever one. Peter thought he was being assessed by one of the railway's senior managers. However that might have compromised the need for independence, not to mention the brown envelope slipped under the signal box door by a person unknown. One such manager did indeed accompany him at all times, but purely as a decoy. The reality was that two other RER members, known only by their first names Tony and Derek, had been commissioned to carry out the task incognito.

We departed Southport early one Wednesday morning, arriving at Ravenglass in time to inspect Millsy's brass polishing and boiler-washing skills outside the engine shed. There followed three days of intensive appraisal from a variety of vantage points, some concealed and some hidden in the full light of a somewhat reluctant summer sun. Day 1 involved a line walk from end to end, posing as track inspectors and litter-pickers, all the time keeping a close watch on how Northern Rock was being driven on its three round trips of the day. That evening we considered it necessary to review the candidate's performance during his leisure hours, so we fearlessly booked in at the company's hostel, and even shared a meal with Peter, cooked by himself under our close supervision.

Next morning, after observing and timing breakfast rituals, we donned the disguise of humble woodcutters and concealed ourselves amongst the bracken at a particularly remote part of the line. There despite wind, rain and a supervisor who thought we were working for him, we pretended to lop branches and build bonfires, all the time covertly recording Peter's driving prowess. The downward slope away from the track gave the well-placed observer a rare sheep's-eye's perspective on train staff performance. Just one of the many factors which make our style of evaluation unique and such good value.

Our initial impressions were generally favourable, although we did feel it necessary to socialise with the recruit again after hours, this time at a nearby hostelry. Fortunately we had taken the precaution of negotiating an 'expenses-plus' form of contract. That evening Peter took the opportunity to pre-announce his passing of the assessment, an understandable and forgivable act of misplaced enthusiasm, for which we hardly docked him any points. Indeed we took it as a compliment to our undercover working methods.

Friday was the real day of decision. We started by observing from both a preceding and following trains in quick succession. Tony shared the cab with a proper driver whilst yours truly occupied a key position in coach five, and took appropriate notes. Note the care taken to avoid travelling in the same, or even adjacent, carriages. In mid-afternoon the final, dramatic test was undertaken, with both of us actually riding on Peter's train in the same coach, to assess at first hand how passengers were being treated. Readers will appreciate the risks we were taking, but having come so far we were not to shirk the ultimate examination.

The outcome, after carefully choreographed deliberations that would outdo any of the current crop of TV so-called talent shows, we were able to announce the result. The candidate had received exactly the same number of votes as a certain Mr E Humperdinck, Esq., in the recent Eurovision extravaganza. Fortunately Peter was not competing against anyone of Swedish, Irish or Uzbekistan origin, so his own personal casting vote was not required. Well done, that man. Or as he himself very nearly said, 'It'll pass the time until the Revenue come begging for my services again.’

All that remained was for us to quietly book out at Control, still posing as unpaid labour of course, collect our apparently modest expenses (200 shillings between us, in return for the hostel key, cheque to follow in plain envelope) and depart whence we came. June is a busy month for us, with Virgin, Scotrail and the Romney, Hythe and Dymchurch all requiring our specialist services, in deep cover as sleeper-trip tourists. Curious staff may wonder why we go north in order to travel south, but that's a risk that must be taken in the cause of unbiased, fair-minded and above all profitable freelance competency assessment.