Cutting and shutting from A to Z 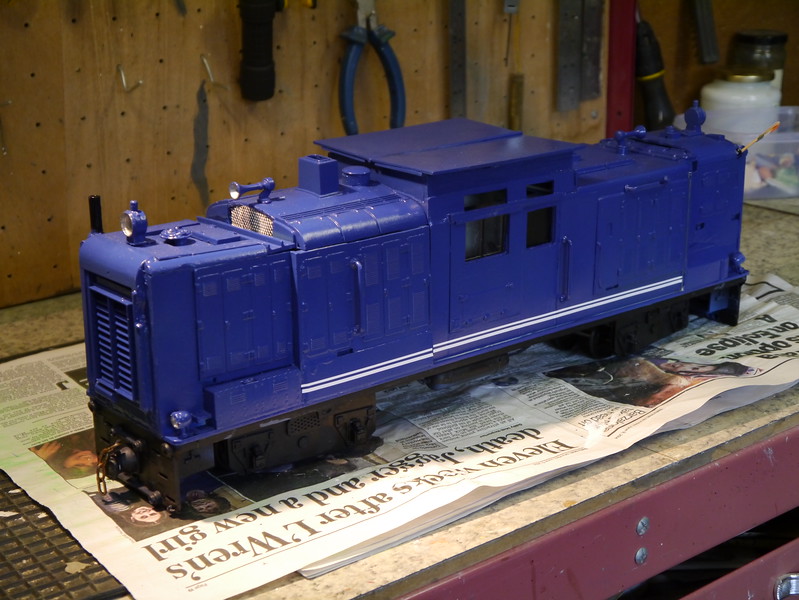 My apologies for the smartypants title, but I was always told that a snappy headline whets the appetite for what is to follow. In this case, what follows is a description of how I converted an American (A)lco into a Indian (Z)DM1.

Perhaps I should start by explaining why, to get the difficult bit out of the way first. I have long had an interest in Indian narrow-gauge trains, and have been fortunate in visiting the sub-continent several times. My garden railway stock includes a Darjeeling B Class with matching coaches and wagons, and a battery D Class is on the stocks, but no Indian diesels. I have cast envious glances at Yatton Engineering’s kits and may yet find myself unlocking the wallet in their presence. Pline’s brass offerings were also of interest, but I wondered how easy it would be to get one delivered across half the world. And this was well before Roundhouse brought out their top-of-the-range model of an NDM6, to tempt the innocent Indiophile beyond endurance. In the meantime I thought of a cunning wheeze to acquire a suitable oil-burner at minimal expense.

In my early years with the hobby I dallied with G-scale track-powered systems. I know better now, and most of my stock has either been sold, cannibalised or relegated to a head-high track circuit in the man-shed. However one legacy item caught my eye as a suitable candidate for conversion into a 16mm prototype. This was an Aristocraft Alco RS3, originally acquired to be the nominal diesel in an otherwise largely steam-outline fleet, and because it was cheap. It featured a fairly narrow body on a fairly wide chassis, the space in-between being a walkway around the sides and front. It was also quite well detailed, with plenty of interesting side panels and other bits and pieces.

So, the logic went, perhaps if the bodywork was removed and cut into appropriate sections, could it be refitted on a suitable carcass around the outer edges of the chassis, thus simulating a wider loco? The answer of course was yes, anything is possible for a competent modeller who tries hard enough. I only fulfilled one of those requirements, but my enthusiasm was sufficient to at least give it a go. The prototype I was aiming for was the B-B diesel hydraulic class ZDM1 built for Indian Railways in the mid 1950s. Several were made for the 2ft 6in gauge Kalka-Shimla Railway and (as class NDM1) for the 2ft foot gauge Matheran Hill Railway.

Now competent modellers take care to research their chosen prototype carefully, seeking out lots of high-resolution photos, detailed drawings, comprehensive descriptions, etc. I contented myself with a brief internet search to throw up a couple of fuzzy images, which were duly downloaded and stuck up on the workshop wall, more for inspiration than guidance. I then set to with razor saw and screwdriver to see what could be hacked off the body of the RS3. Quite a lot was the answer, and I soon had a large pile of plastic bits and pieces, alongside a chassis which actually looked more impressive with the body off than on. New bogies were required for 32mm running, and yes, I know that makes it an NDM1, but just how does A to N cut it in the clever title stakes?

A test run of the chassis on the St Aubyn Light Railway, handily placed just outside the shed, showed it was a runner, with plenty of space for batteries and controller. Back in the shed the reconstruction got underway. Some thick plasticard was cut into rectangles to build up the new body shape, using stripwood and aluminium angle for buttressing. The panels removed from the Alco body (the majority of which were ventilation grilles of one sort or another) were then glued on to the plasticard, in more or less random order. Some of the original roof sections were widened with plastic inserts, thereby retaining the curved transitions between vertical and horizontal surfaces. The cab was all-new, as the Alco one was both too curved and too narrow to fit the new body.

I remembered just in time to make the central portion as a lift-out section, for access to the innards. The roof of this piece was adorned with a large hatch cover, from Essel Engineering if memory serves. And talking of innards, I had ambitious intent for all sorts of sounds, lights, horns, radio controls etc. To do things properly for once, I started by drawing a circuit diagram. Some days and nights later, I decided simple was beautiful and scaled back the plans drastically. Even then, with speed controller, Chuffed2bits sound module and both bow and stern lighting (courtesy of Cornwall Boats) there was enough wiring for virtually any size rat to make a comfortable nest. Rigorous pruning with wirecutter and Stanley knife restored some sort of order, but no prizes for orderly layout are ever likely.

The completed model was sprayed with grey primer and then with Ford Capri Blue. This turned out a little darker than proper Darjeeling blue, but it will do for now. The interior was sprayed white to maximise the visibility of the various bits and pieces. Some Model Technics white Trimline was applied along the sides, rather inexpertly but sufficiently well to pass the ‘six-foot rule’, which is all my models are ever required to do. Narrowplanet supplied the 'Kangchenjunga' nameplate, the mountain in question being the dominant feature of the upper part of the Darjeeling Himalayan Railway, whenever the weather gods are pleased to reveal it. The third highest in the world, it’s a little under 300m lower than the Big E 150km away (itself visible at sunrise from Tiger Hill, a half-hour, half-asleep taxi-ride from Darjeeling). End of geography lesson.

Running trials on the SALR proved successful, showing good pulling power on a modest 9v, and becoming virtually unstoppable on 14v. The radio is a Timpdon unit, which I much prefer to the standard waggly-stick aircraft transmitters, for which I never seem to have quite enough fully-charged batteries, and which are prone to uncovenanted control inputs from my multi-thumbed hands. On a large loco like this there is plenty of room for both aerial and controller modules, although the good news is that their latest 2.4Ghz range has these combined into one.

The end result of the rebuild was most pleasing, to me at least, with a sufficient resemblance to the target vehicle to justify the exercise. Imposing in appearance, loud of (authentic) sound and powerful enough to recover even the largest gassed-out steamer and its rolling stock, the end result is that most valuable of beasts, A Really Useful Engine. Just needs a horn module now.

Some more photos are here.